Andy Larsen: Our COVID policies have mostly led to frustration. Nobel winner gives us 8 simple rules to fix that. 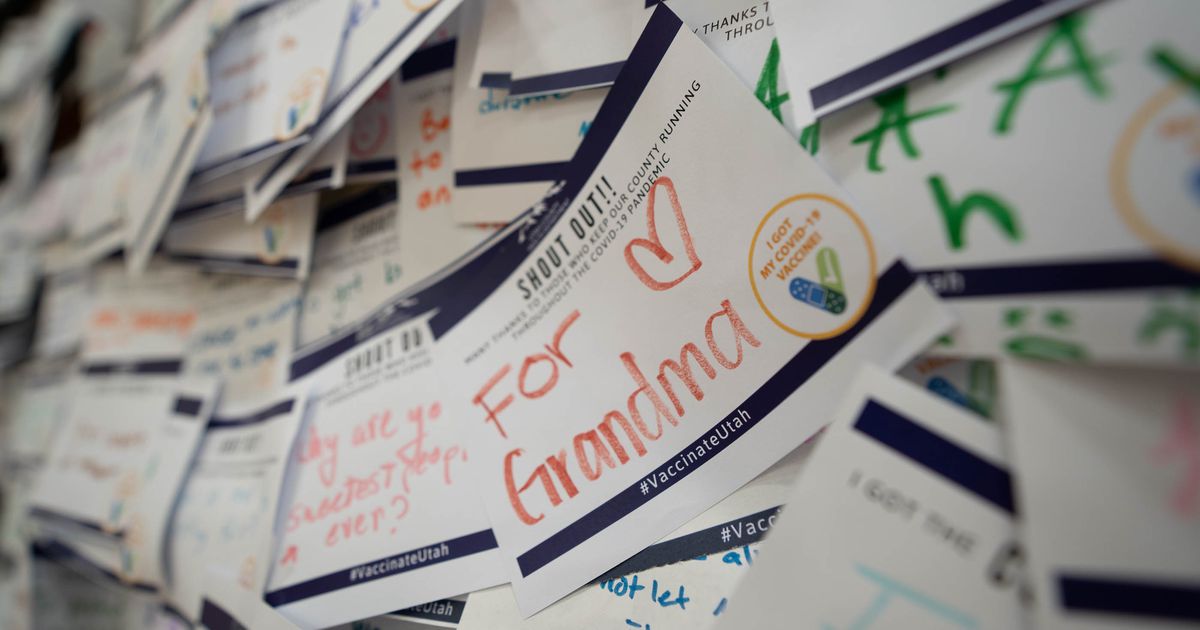 Our COVID-19 predicament is a clear “tragedy of the commons.”

What’s that, you ask? Here’s the deal: In 1968, American ecologist Garrett Hardin wrote an article called, well, “The Tragedy of the Commons.” In it, he noticed a whole host of social dilemmas — times when people doing what’s best for themselves individually led to problems for the collective.

There are approximately 1 billion examples of this kind of thing happening in our world; for some reason, the one economists always mention first is overfishing. But here are some others: littering; deforesting; climate change; traffic jams; fast fashion; roommates not doing the dishes; the actions of hedge funds that led up to the U.S. housing crisis; people leaving shopping carts in parking spaces; and so on.

Thinking about these cases has become a whole section of economics. And, now, the pandemic has been one tragedy of the commons after another.

Actually, the first one came before the pandemic even arrived. As people stocked up on just hundreds and hundreds of rolls of toilet paper to do what was best for their families. Soon, many people couldn’t buy toilet paper at all, even in small quantities. If shoppers had purchased toilet paper normally, we would have been just fine, but the panic led to overbuying, which for a while led to elimination of the supply.

Later, though, the commons at stake was “the very air we breathe,” as writer Stuart Vyse put it. People who weren’t exceptionally at risk realized essentially that they could choose to weather inconveniences for the greater good or ignore the problem and carry on normal lives. For example:

• Staying home was an unusual experience, but not staying home put public health at risk.

• Wearing a mask is annoying to do, but not wearing one puts people around you at risk of getting your germs.

• Upgrading air ventilation and filtration systems costs money, but it benefits everyone who comes into a building.

• Getting vaccinated might mean feeling ill for a day, but if everyone gets vaccinated, a society can reach herd immunity.

Hardin was a pessimist. He used the word “tragedy” in the title of his article because he didn’t really think these situations were going to work out. And in some cases — and including many during the pandemic, the Hardin pessimism is probably warranted.

But I’m an optimist by nature, so we have some solid examples of social dilemmas that do work out. And because we’ve studied the “tragedy of the commons” concept for quite some time, we have some good ideas on what works to solve these problems — ideas that can work in all sorts of cases, coronavirus or not.

In particular, American economist Elinor Ostrom won the Nobel Prize in economics in 2009 for her work on this issue, noticing the commonalities (heh) in the commons that worked across the globe. And she, albeit in some academic jargon, essentially created “Eight Simple Rules for Making Your Tragedy of the Commons Not So Much of a Tragedy Anymore.”

So what are her eight rules? Here they are, as summarized by writers Jeremy Williams and Tom Ling:

1. Create a clear definition of what we hold in common and who has access to it.

Ah, already we’re running into some difficulties — this may well be the toughest item on Ostrom’s list to achieve in the context of the pandemic.

But an effective way of communicating this would have been by emphasizing “the air we breathe” commonality. We, collectively, need to make sure that the air we breathe in public spaces is healthy for everyone to access. We can do that by staying home if possible, wearing masks if it’s not, filtering air inside, and getting vaccinated to reduce the likelihood of spread.

Our government tried a version of this — “my mask protects you, your mask protects me” gets close to this idea. To me, though, it focuses a bit too much on the individuals involved in the equation rather than the collective resource at stake.

And. in fairness, the air we breathe isn’t the only commons at stake here — certainly, a health care system is an example of the commons. In some ways, the economy is as well. People who favor a Sweden-style laissez-faire approach might reframe the above to say that people were making selfish decisions to benefit their health, but that those decisions are hurting the collective economy.

As Williams writes: “There is no one-size-fits-all approach to common resource management. Rules should be dictated by local people and local needs.”

There was some good and some bad here. The county-by-county transmission index is clearly an effort to make local rules that make sense to the situation found in the local community. Great!

But those principles were clearly abandoned at other times during the legislative process. In Utah, the Legislature moved to prevent counties from creating their own rules, which caused consternation and anger from both sides. Being a state that believes in local control requires allowing … local control.

It’s pretty straightforward — Ostrom found that people generally follow rules that they helped make, even if they involved compromise.

But the pandemic rules never, ever, felt as if they had any real public input. At the beginning, decisions came down from the governor’s office or the health district, real-time decisions that were made quickly. Later, decisions were made by the Legislature, a body that has remarkably low approval ratings from the community. People didn’t feel as if they were being represented.

I get that this is hard to achieve in a crisis. But that a pandemic eventually came shouldn’t have been a surprise — health experts predicted it, and, heck, we had a minor one just a decade ago with the swine flu. At that point, we should have been able to come together as a community and say, “OK, if something worse happens, what steps will we take?” We prepared for earthquakes but not the more pressing threat.

4. Commons must be monitored.

“Once rules have been set, communities need a way of checking that people are keeping them,” Williams says. “Commons don’t run on goodwill, but on accountability.”

There has been only mild monitoring and near-zero accountability. If you know you’re sick and go to a bar anyway, and the contact tracing finds that you caused 10 people to get the virus and one of them dies, you don’t even find out. You can pretend to have been vaccinated and skip wearing a mask. Businesses who put the public and employees at risk have generally not been outed for doing so (with a few exceptions).

This doesn’t have to be the case. Take a look at France. It decided that restaurants would have to check people for a COVID-19 pass before allowing them to enter. Vaccination appointments immediately exploded.

Emmanuel Macron announced on Monday that a proof of vaccination (or a negative test) would very soon be needed to access public events, restaurants, cinemas, stations & airports…

Since then, more than 2.2 million vaccination appointments have been booked in less than 48 hours. pic.twitter.com/9lAr52iDgf

5. Sanctions for those who abuse the commons should be graduated.

In the successful systems Ostrom studied, common participants weren’t willy-nilly banned. They were sometimes warned, and after that, they were fined. After all, nobody wants to follow draconian rules that don’t make any sense. The crime should fit the punishment.

Forgetting a mask once is the perfect example. It certainly is the kind of thing that should just be a warning. But being an anti-vaccine jerk who flagrantly violates the recommendations time and time again isn’t punished either. That’s a problem.

6. Conflict resolution should be easily accessible.

This one makes a lot of sense, too. Conflicts cause the cracks in the system by giving unhappy people no recourse to address those conflicts. Ostrom says conflict resolution should be “informal, cheap and straightforward.”

For the most part, conflicts between people due to the pandemic have been ignored by those who would have the power to resolve those conflicts — which is certainly informal, cheap and straightforward! Unfortunately, it’s hard to call it resolution.

7. Commons need the right to organize.

“Your commons rules won’t count for anything,” Williams writes, “if a higher local authority doesn’t recognize them as legitimate.”

This reminds me of nothing so much as the battle between local school districts and the state regarding masking in the classroom. Some school districts chose to mandate wearing masks, but the state decided to make that illegal, effectively usurping that authority.

8. Providing multiple layers of nested groups down to a grassroots level to ensure the focus remains on the common interest.

This is something that we theoretically have: nested government structures to pass information from the bottom to the top, with each government group moving up the pyramid adding wider oversight.

The problem is that we didn’t necessarily go far enough in tying it all together. We’ve been contact tracing for 17 months now in Utah but haven’t really shared many of those lessons with the public. Other countries, like the United Kingdom, are lapping the academic excellence of the U.S. in terms of research because of their cohesion in these efforts. Too frequently, the overlapping parts haven’t communicated like they should.

To me, road maps like this are exciting. Yes, there’s nearly universal acknowledgment that the pandemic hasn’t gone very well, and to be sure, that causes lots of blaming and side-taking. But my hope is that clear-minded policy thinkers can look at the widespread unhappiness as an opportunity, a groundswell of support that might change the systems for the better.

Our current problem — of selfishness leading to deterioration — can be avoided. We just have to stop, consider, and retool. Luckily, we know what to do: Follow Ostrom’s Eight Simple Rules.

Andy Larsen, one of The Salt Lake Tribune’s Utah Jazz beat writers, doubles as a data columnist. You can reach him at [email protected].

Cambodia ‘Raises’ Minimum Wage by Two Dollars, Leaving Workers as Poor as Before

Cambodia ‘Raises’ Minimum Wage by Two Dollars, Leaving Workers as Poor as Before