Two Impacts, Not Just One, May Have Formed The Moon – Sky & Telescope 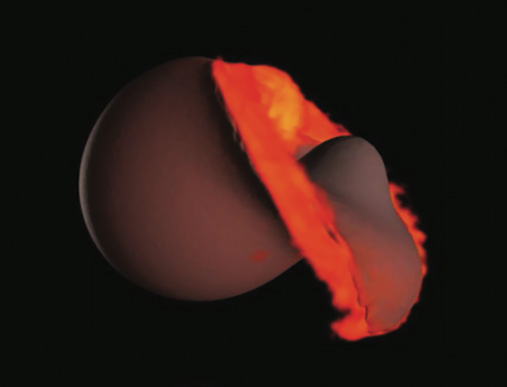 It may have taken two tries to make the Moon.

Scientists have long thought that the Moon formed with a bang, when a protoplanet the size of Mars hit the newborn Earth. Evidence from Moon rocks and simulations back up this idea.

But a new study suggests that the protoplanet most likely hit Earth twice. The first time, the impactor (dubbed “Theia”) only glanced off Earth. Then, some hundreds of thousands of years later, it came back to deliver the final blow.

The study, which simulated the literally Earth-shattering impact thousands of times, found that such a “hit-and-run return” scenario could help answer two longstanding questions surrounding the creation of the Moon. At the same time, it might explain how Earth and Venus ended up so different.

“The key issue here is planetary diversity,” says Erik Asphaug (University of Arizona), who led the study. Venus and Earth have similar sizes, masses, and distances from the Sun. If Venus is a “crushing hot-house,” he asks, “why is Earth so amazingly blue and rich?”

The Moon might hold the secret. Its creation was the last major episode in Earth’s formation, a catastrophic event that set the stage for the rest of our planet’s evolution.  “You can’t understand how Earth formed without understanding how the Moon formed,” Asphaug explains. “They are part of the same puzzle.”

The new simulations, which were published in the October Journal of Planetary Sciences, put a few more pieces of that puzzle into place.

The first has to do with the speed of Theia’s impact. If Theia had hit our planet too fast, it would have exploded into an interplanetary plume of debris and eroded much of Earth. Yet if it had come in too slowly, the result would be a Moon whose orbit looks nothing like what we see today. The original impact theory doesn’t explain why Theia traveled at a just-right speed between these extremes.

“[This] new scenario fixes that,” says Matthias Meier (Natural History Museum, Switzerland), who was not involved in the study. Initially, Theia could have been going much faster, but the first impact would have slowed it down to the perfect speed for the second one.

The other problem with the original impact theory is that our Moon ought to be mostly made of primordial Theia. But Moon rocks from the Apollo missions show that Earth and the Moon have nearly identical compositions when it comes to certain kinds of elements. How could they have formed from two different building blocks?

“The canonical giant-impact scenario is really bad at solving [this issue],” Meier says (though others have tried).

A hit-and-run return, on the other hand, would enable Earth’s and Theia’s materials to mix more than in a single impact, ultimately forming a Moon chemically more similar to Earth. Though Asphaug and colleagues don’t quite fix the mismatch, they argue that more advanced simulations would yield even better results.

Resolving this aspect of the giant-impact theory would be no mean feat. But Asphaug’s real surprise came when he saw how hit-and-run impacts would have affected Venus compared to Earth.

“I first thought maybe there was a mistake,” he recalls.

The new simulations showed that the young Earth tended to pass on half of its hit-and-runners to Venus, while Venus accreted almost everything that came its way. This dynamic could help explain the drastic differences between the two planets: If more runners ended up at Venus, they would have enriched the planet in more outer solar system material compared to Earth. And since the impactors that escaped Earth to go on to Venus would have been the faster ones, each planet would have experienced generally different collisions.

This finding flips the original purpose of the study on its head. If Venus suffered more giant impacts than Earth, the question would no longer be “why does Earth have a moon?” but “why doesn’t Venus?”

Perhaps there was only one hit-and-run event, the one that made our Moon. Perhaps there were many, but for the same reason that Venus collected more impacts than Earth, it also accreted more destructive debris, obliterating any moon it already had. Or perhaps the last of Venus’ impacts was just particularly violent.

Finding out means taking a trip to Venus. That would provide “the next leap in understanding,” Meier says. If Earth and Venus both had hit-and-runs, for example, then the surface of Venus ought to be more like Earth’s than previously expected. If Venus has the same chemical similarities as the Moon and Earth, that would throw out the giant-impact theory’s last remaining problem.

“Getting samples from Venus,” Asphaug concludes, “is the key to answering all these questions.”